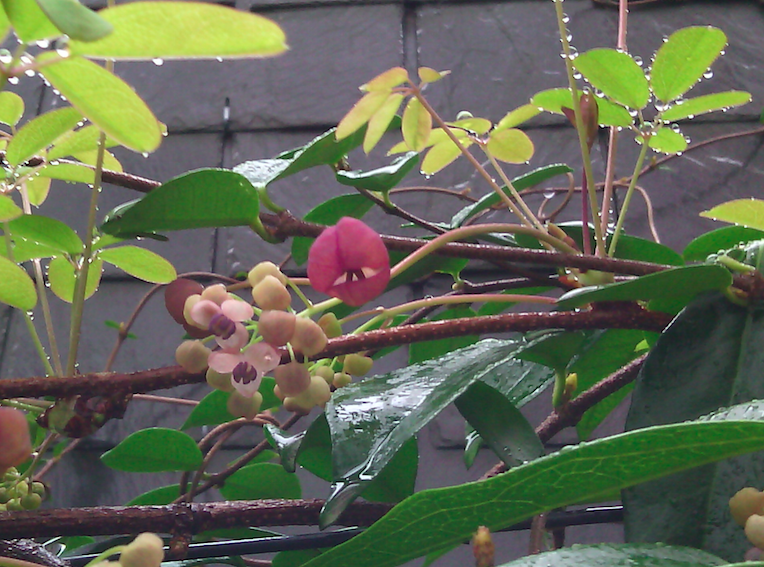 The two akebia plants in the terrace boxes are covered with flower buds among the tiny, new leaves. The first, three-petalled flowers have just started to open, but they are easily overlooked. The named varieties of Akebia quinata, offered by many on-line nurseries, mostly have flowers that are dark purple, white or a clear pink.  Our (anonymous) strain does have purple female flowers, but the smaller, more abundant male flowers are a pale, pinkish beige. The photo doesn’t give much sense of scale – the larger flowers are only a centimeter across.

I wasn’t familiar with akebias before moving to Paris, so I’ve been reading up on them. Akebia quinata is native to Japan,  introduced to Britain by the plant hunter Robert Fortune in 1845. The botanical name is a latinization of the Japanese Akebi; in English the species is also known as the chocolate vine, though I’ve only found one source that describes the flowers as chocolate scented. The sausage-shaped fruit pods have sweet, edible pulp around the seeds. The bitter outer pod is traditionally used as a vegetable in Japan – stuffed and fried according to Wikipedia – but we’re unlikely to have a glut of fruit to deal with. Cross-polinisation is necessary for fruit set, and presumably some suitable pollinating insects.

One thought on “A Subtle Akebia”