Sometimes the camera reveals details that the naked eye overlooks.  Back in Paris with a dull, grey afternoon to spare, I took the camera exploring in the 2nd arrondissement.  First stop Sentier Metro station.

I’ve often travelled through Sentier station on the metro but I’d never noticed its entrance on Rue Réaumur before.  (Its a busy junction so if you’re cycling through you need to pay attention.)  The twin doors leading to the metro stairs are tucked in the bottom right corner of an extraordinary facade. 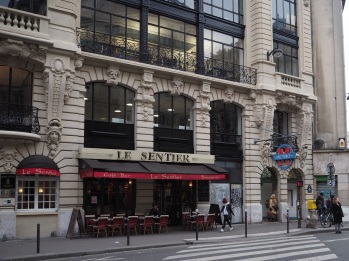 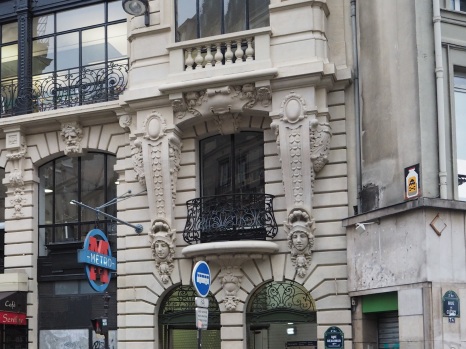 Sentier was historically a weavers’ district and the quartier is still an important centre for fabric wholesalers, textile trades and garment makers.  Le Sentier has given its name to a network of textile trades and professionals, the practical foundation on which the fashion industry depends.

The Le Sentier building, built in 1900 by architects Jolwald and Devillard, is a hybrid of steel framed practicality and ornate, stone decoration.  Zooming in with the camera reveals bearded, classical masks over the windows and garlands of fruit on the pillars.  Oddly the carved faces over the doors appear to be wearing bonnets decorated with cows’ ears….

An extra character, who I didn’t notice till I was looking at the photos, is the mosaic Space Invader in a medicine bottle, on the corner of the building next door.  That looks as if it was intended to go over the door to a chemists shop, though the shop downstairs currently sells clothes.

One thought on “Seen in Sentier”