The Turn of the Tide

Low tide in the harbour at St Goustan.  The reflections of boats and buildings are barely disturbed by the gentle rippling of the river running through the arches of the medieval bridge.

Twice a day water rushes upstream under the bridge as the tide flows in.  On the seaward side of the bridge, the water held back by the old stone piers looks deceptively calm but the current sweeping through the arches swirls into strong eddies.  After an early collapse, the bridge was rebuilt with massive stone piers; the resulting, narrow arches mean the masonry has to withstand even more water pressure from first one side, then the other as the tide turns.

The little port of St Goustan on the river Loch, seen from the ramparts of Auray castle – May 2016. 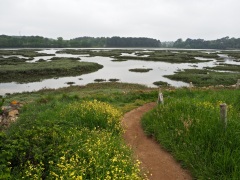 High tide on the Auray river on the way to Bono – at the highest tides this footpath is under water.

Tide mill at Saint Philibert – no longer in working order. 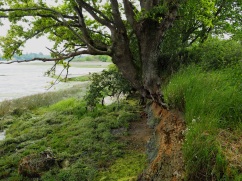 Riverside oak at low tide on the Auray river.

Salt marsh plants at low tide – the grey tussocks of sea lavender will be covered in a haze of purple flowers later in the year.

High tide on the Auray river, downstream from St Goustan. 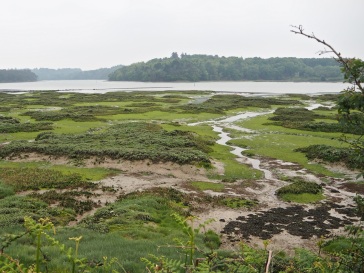 Low tide on the Auray river, down stream from St Goustan. The smooth green sward is not short grazed grass, as the photo might suggest, but a ‘lawn’ of green alga.

Upstream from St Goustan, and at around thirty other points on the creeks that feed the Golfe de Morbihan, an old weir, sluices and mill buildings show where the force of the tide has been harnessed in past centuries.  Long disused as corn mills, the potential for electricity generation at these sites remains untapped.

Plants can’t tap the power of the tide but many species are adapted to growing on the rich silt left by the river.  Although the water along the estuary is salty the shoreline here, some twenty kilometers inland from the open sea, isn’t battered by salt winds so oak trees can grow right down to the high tide line, leaning out into the light over the salt marshes.

Oak was an important raw material in the estuary boatyards over the centuries.  Many of the beautifully crafted wooden boats that were the workhorses of the Morbihan oyster trade are now redundant wrecks, left to the mercy of the tides in out of the way creeks.  These boat graveyards are a sad sight but the rotting wood is returning to the estuary ecosystems, so new life will come from it in time.

2 thoughts on “The Turn of the Tide”