A side turning from the woodland path leads to a small, stone building at the edge of a marshy clearing.  Fresh water, welling up from a spring, trickles into a stone-lined pool.  Too far from the village to be a lavoir or laundry; maybe a watering point for livestock.  The neatly dressed stone of the shelter and the two ancient stone basins alongside it suggest something more than a convenient cattle trough.

This fontaine is the starting point for the annual Pardon de Plas Kaër, one of many such events in Brittany combining a solemn procession around local landmarks, a church service and a community feast.  Now promoted by local councils as part of regional heritage and used as fundraising events for church restoration, the origin of the pardons is thought to date back to fifth century evangelism by Celtic monks.  The veneration of the many ‘holy’ wells in the region is probably much older than that. 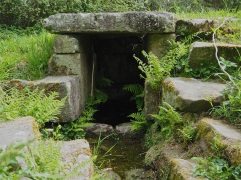 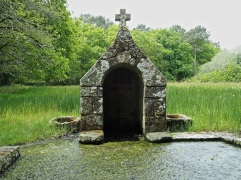 As in Cornwall and other parts of the British Isles, the early Celtic missionaries didn’t try to extinguish ancient pagan traditions in Brittany but instead amalgamated them into new Christian rituals.  Wells that might once have been dedicated to the life-giving spirit of water itself gained the protection of patron saints, just as some ancient menhirs were carved with Christian symbols and chapels were built over burial cairns.

The water of the Fontaine de Plas Kaër is traditionally credited with healing properties for the eyes.  Other springs were renowned for relieving fevers, rheumatism, skin complaints and even excessive anger.  While the people of Brittany are more likely to turn to the national health service than a healing well to treat their medical problems today, the carefully maintained fontaines – sacred or secular – serve as a valuable reminder of the importance of fresh water; essential to life and all too easy to take for granted.

One thought on “Holy Water”