Beyond the Window Box started as an account of the joys and frustrations of a small, north-facing balcony garden in central Paris.  When were moved in to the rented apartment, some two years ago, we became custodians of four, large built in plant boxes with ‘a selection of perennial plants and climbers in fair condition’ or words to that effect.  In fact a fair few of those plants were in a near terminal state of hibernation.  Surprised by a renewed supply of water and food, dusty stumps sent out strong new shoots and the terrace disappeared behind a curtain of greenery.  Here’s the terrace seen from the outside last week: 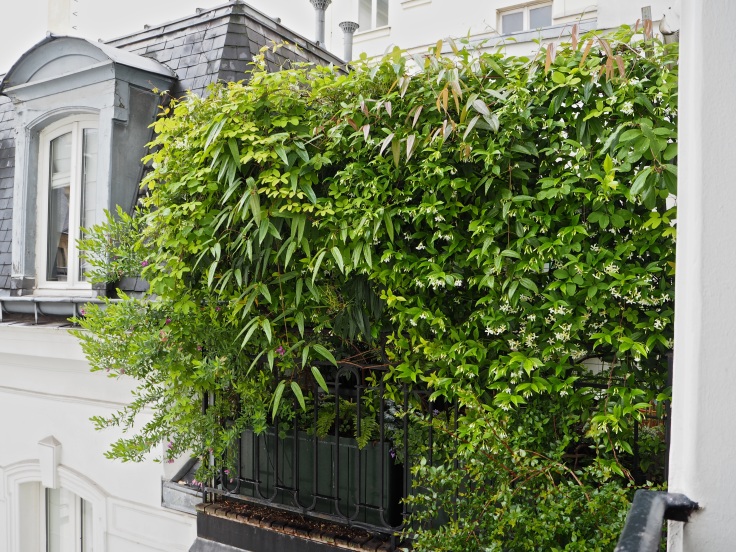 Our landlord regarded this as a great success – the plants were intended to screen the terrace from sight – but to a gardener on the inside the luxuriant growth was a mixed blessing.  Great if you wanted to grow ferns or heucheras in cool shade but not much scope for anything else.

On Saturday we left that challenge to new custodians and (together with twenty large plant pots) moved across the river, to an apartment at the south edge of the fifth arrondissement.  I’m well aware that the fifteen square metre terrace at the old place was an uncommon luxury in central Paris, even if direct sunlight never reached it.  The new place has the benefit of an even more uncommon rarity, a real garden.  About half the thirty square metre area is concrete but the other half is real earth; unpromising, silty clay near the surface but clearly good growing for plants that get their roots down deep.  Here we’ve become custodians of a cherry tree entangled with a twenty foot high eleagnus bush, a monster choisya, a huge and unhappy climbing rose and some vigorous ivy.  New challenges and great possiblities.

Our new landlord knew that the garden needed some drastic attention so I have carte blanche here with the regeneration.  One tree is quite enough in such a tiny garden so turning the eleagnus and choisya back into shrubs is the first project.  Here’s why I’ve not got round to blogging in the last few days:

The green-black alga that I’ve been scrubbing off the concrete gives an idea of how shady this south facing garden had become.  A screen of shrubs and some dapped shade in summer are great benefits but you can have too much of a good thing.

it’s been grey and drizzly for most of the time since we arrived.  Today the sun’s out, the cherry tree is casting dappled shadows on the wall and a blackbird is singing.  The joys of city living!