I became European at the age of ten.  A couple of years ahead of Britain’s successful application to joint the Common Market, the new head teacher of my primary school decided it was time to widen the horizons of the school’s oldest class.  We were going on a European Journey.

The itinerary of our short coach trip was ambitious, with worksheets and quizzes to complete along the way.  Destinations merged together and my memories were already confused by the time we reached home but vivid snapshots stayed with me.  Elderly lacemakers and canal boats in Bruges.  An underground tour of a ‘miniature’ coal mine in the Ruhr valley. The towering spires of Cologne cathedral and the uncomfortable knowledge that the surrounding city had only recently been rebuilt after devastation by ‘our’ bombers.

I returned home understanding that I’d seen one small corner of Europe, a large and complicated place where languages changed at invisible lines and meals were unpredictable. I’d learnt that, despite the sea surrounding the British Isles, our history and our future were somehow wrapped up with those of The Continent.  These other countries were our neighbours. The wide horizons offered exciting possibilities, providing I didn’t have to come back on a coach with a worksheet.

On Wednesday, as the process of detaching Britain from the European Union was set in motion, I went on another short tour of Europe, this time without leaving Paris. I’d travelled through Europe metro station many times but I’d never got off the train there or explored the quartier.  The district that came to be known as Europe was developed in the early nineteenth century by two entrepreneurs, Swedish banker Jonas-Philippe Hagerman and Sylvain Mignon, locksmith to king Charles X.  The main streets of the development radiate in star fashion from the Place de l’Europe with a network of smaller streets between, named (mostly) after European cities.

Click on the first photo below for an alphabetical selection. 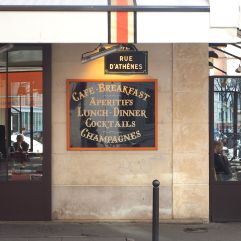 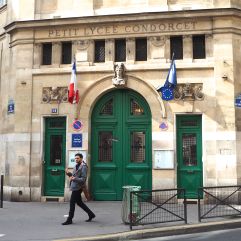 Berne – the only representative of Switzerland

Bucharest – did you know it’s the sixth largest city in Europe? 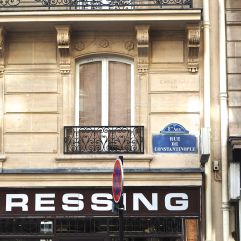 Constantinople – known as Istanbul by the time this street was named 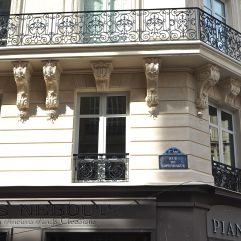 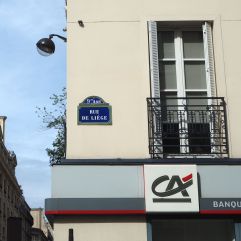 Milan – one of six Italian cities in the developers’ selection

My photographic tour of Europe started as a distraction and ended as reassurance.  The street names are the personal selection of two nineteenth century real estate developers, so they have no great significance, but they are a reminder of the flexible nature of boundaries and classifications.  Britain may have started unpicking the threads that tie us to the European Union but the country can no more leave Europe than leave the northern hemisphere. Beyond the facts of geography, enduring links with other countries will remain, within Europe and beyond, grown from shared history and shared values, family ties, trade, cultural exchange and maybe even school journeys.

There’s no doubt that the world is becoming ever more interconnected.  National boundaries mean little to multinational companies and jobs are lost at the call of distant accountants. Immediate news of faraway disasters rouses our sympathy but numbs our practical compassion.  Mass migration stretches and challenges our neighbourliness.  It’s too easy to characterise those who voted to Leave the EU as inward looking and Remainers as outward looking but strong local communities are not incompatible with an international outlook and there’s common ground to be found.  If we’re ‘taking back control’ from Brussels why stop there?  Isn’t it time to take our purchasing power back to local businesses, to pay attention to the real issues of local politics, to get to know our neighbours (whatever their origins) and then to look outwards as citizens of the world?