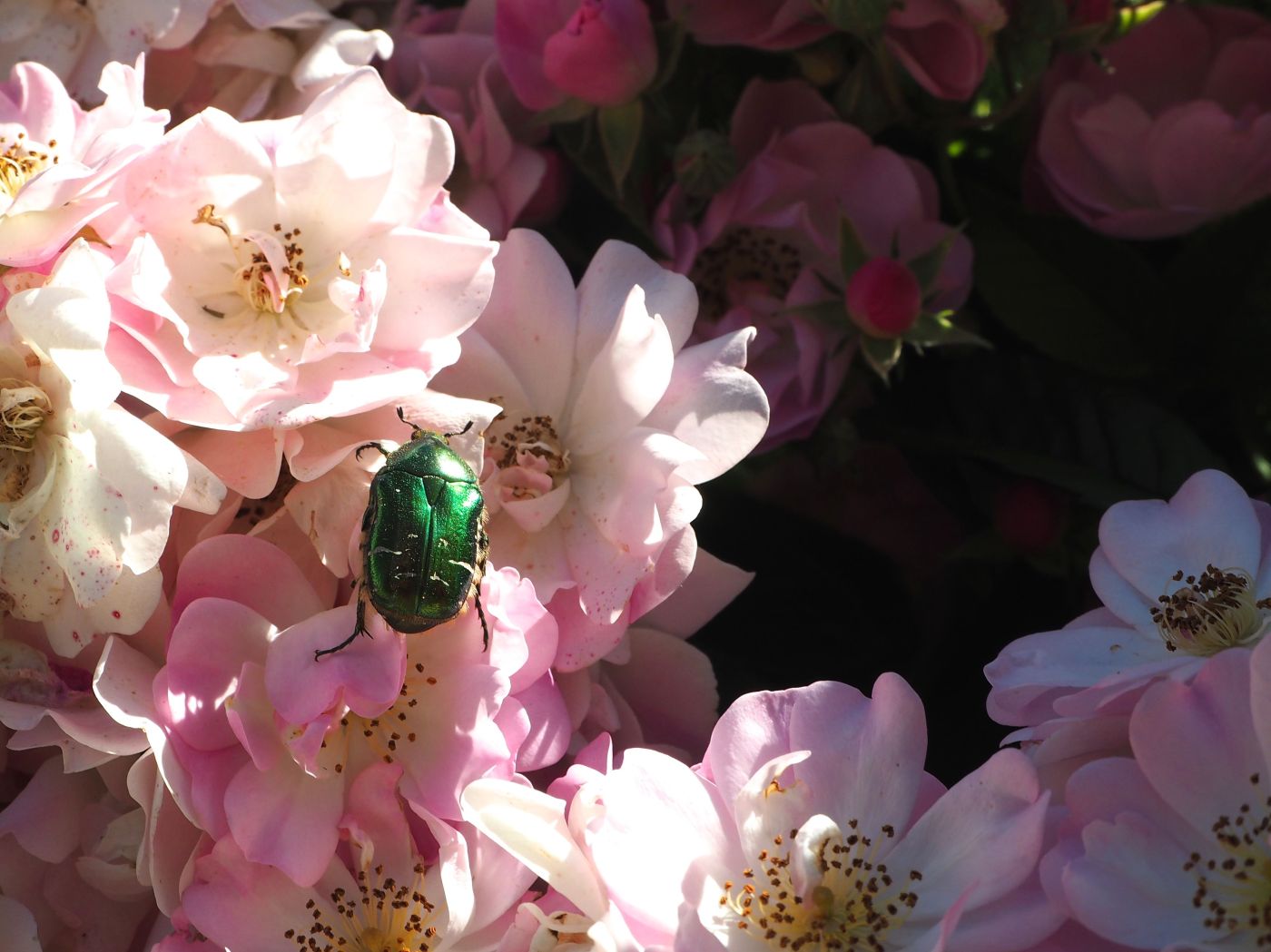 A rose chafer beetle basks in the sun on a warm afternoon at the Château de Malmaison. 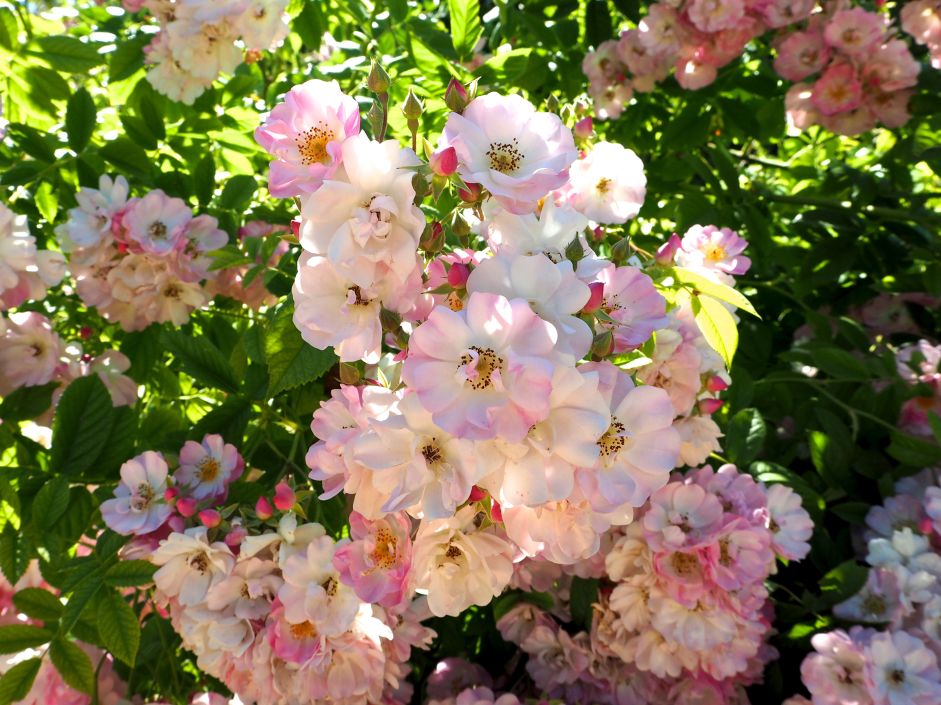 In the garden of historic roses most of the once-flowering varieties had already finished their short seasonal display.  Most of the roses in the mixed borders around the chateau were looking tired and sparse too, except for one magnificent, unlabeled plant.  I’d like to be able to say it’s the famous ‘Souvenir de Malmaison’ but I think it’s actually the variety Apple Blossom, introduced by the American Burbank nursery in 1932.  Here several of the brilliant, green beetles were moving busily from flower to flower, munching on pollen and tender bits of petal, seemingly overwhelmed by the feast on offer. 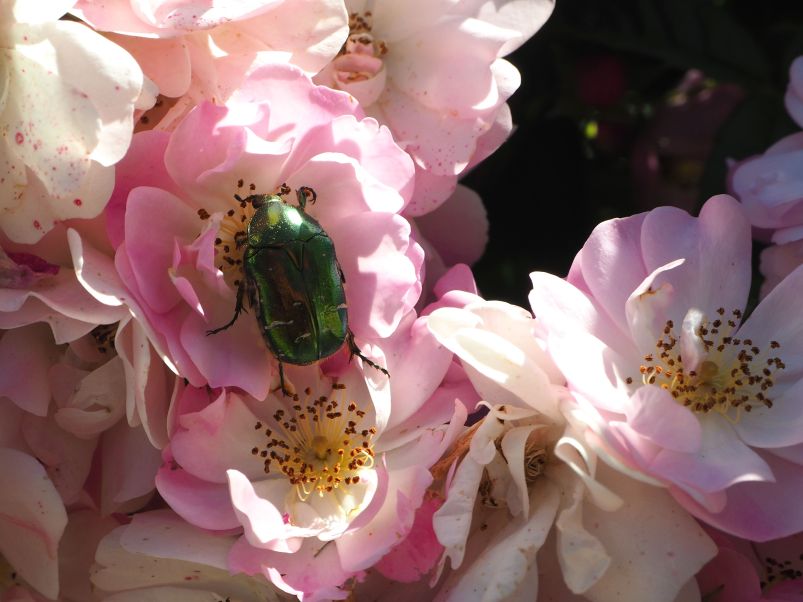 There have been roses at Malmaison for over two hundred years.  The Château was the home of Joséphine de Beauharnais, first wife of Napoleon Bonaparte, from 1799 until her death in 1814.  (For a few years up  to the couple’s divorce in 1809, Bonaparte lived there too in the intervals between his military campaigns). Joséphine, who grew up on the tropical island of Martinique, had a passionate interest in botany in general and in roses in particular.  During her brief time at Malmaison Joséphine ordered the building of greenhouses to house a collection of exotic plants, never previously cultivated in metropolitan France, and sent botanists around the world to collect varieties and species of rose.  Her collection of 242 cultivars was immortalized in the paintings she commissioned from artist Pierre-Joseph Redouté. 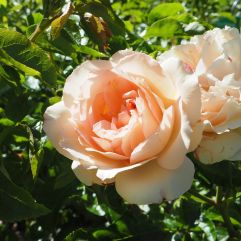 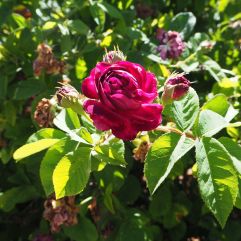 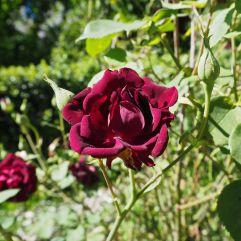 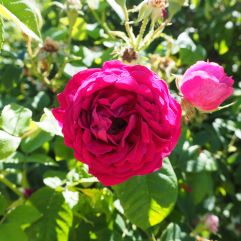 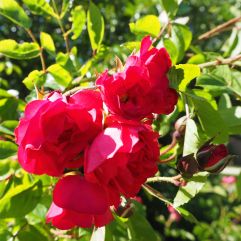 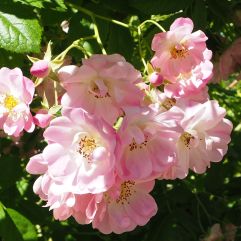 I didn’t take any general photos of the château and its garden, mostly because of the fierce early afternoon sun but also because the garden wasn’t really looking very photogenic.  A two year project, financed by luxury watch makers Piaget, allowed restored gardens of old roses and sub tropical plants to be opened in 2014 but the upkeep of these areas looks as patchy as that of the rest of the garden.  Similarly expensive restoration in the château has left many rooms of the building looking magnificent but gardens don’t lend themselves to one off investment in the same way.  As Joséphine must have known only too well, gardens are ephemeral, like their creators.

2 thoughts on “Beetle and Roses”