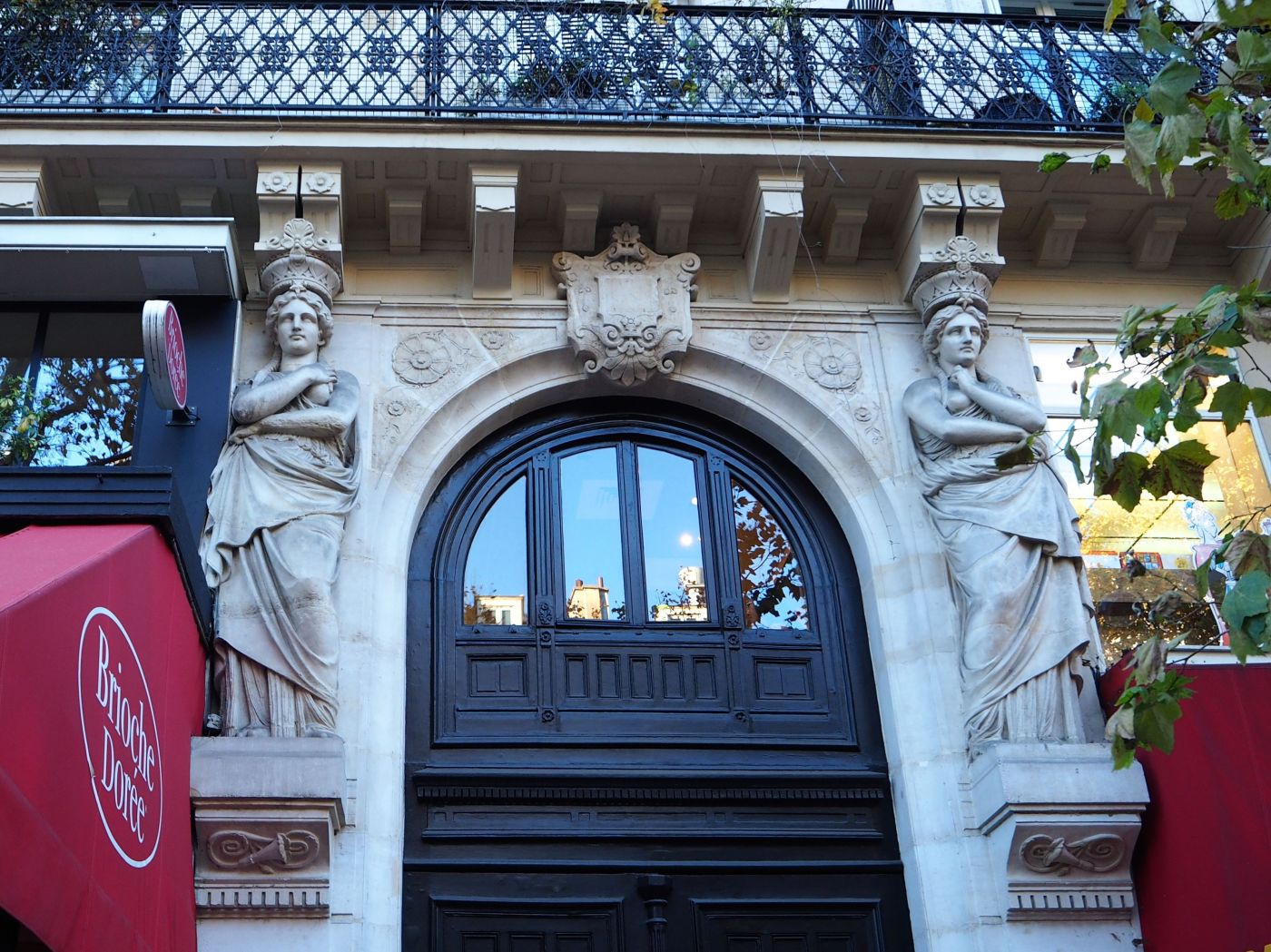 The two figures supporting this porch on Boulevard St-Michel look a little bored with their task. 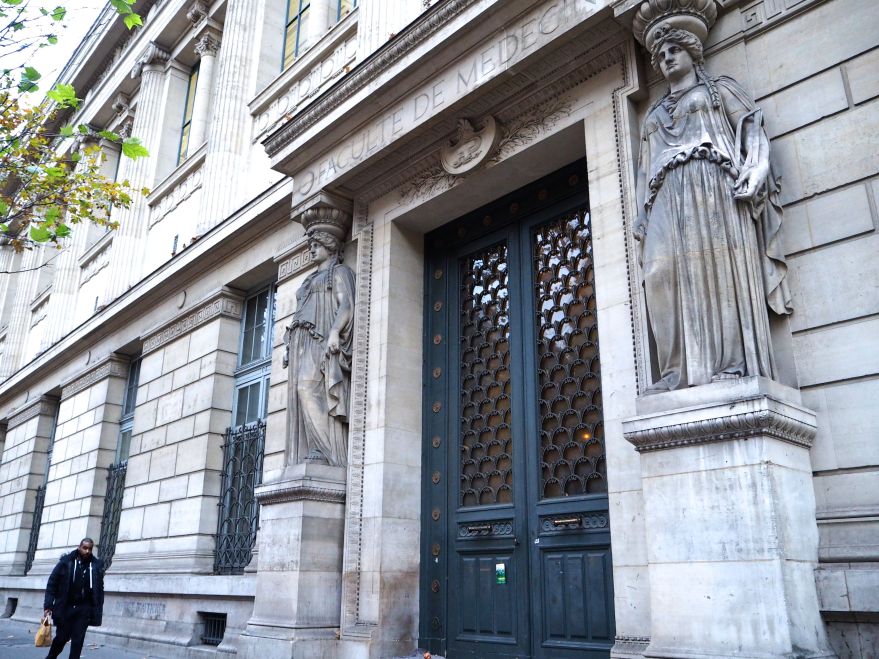 The giant caryatids either side of the back door of the Faculty of Medicine represent medicine and surgery and show a serious regard for their roles.  I’m not sure what the one on the left is carrying but the one on the right is armed with a rather alarming saw.  Holding the porch on their heads seems to be of secondary importance.

These figures which date from the late eighteenth century reflect many of the details of the caryatids of the Erechtheion in Athens, built some 24 centuries earlier. 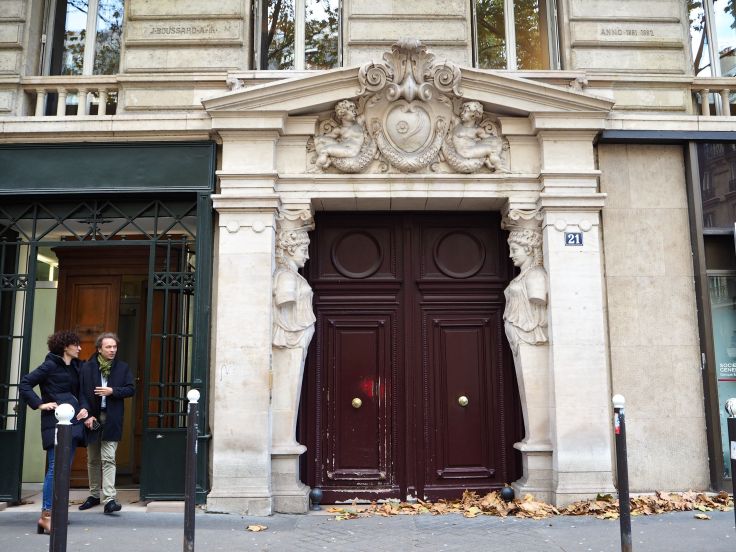 This pair of caryatids on Boulevard Saint-Germain look more cheerful even though, in faithfully copying the appearance of ancient Greek statues, the nineteenth century sculptor has given them truncated arms. 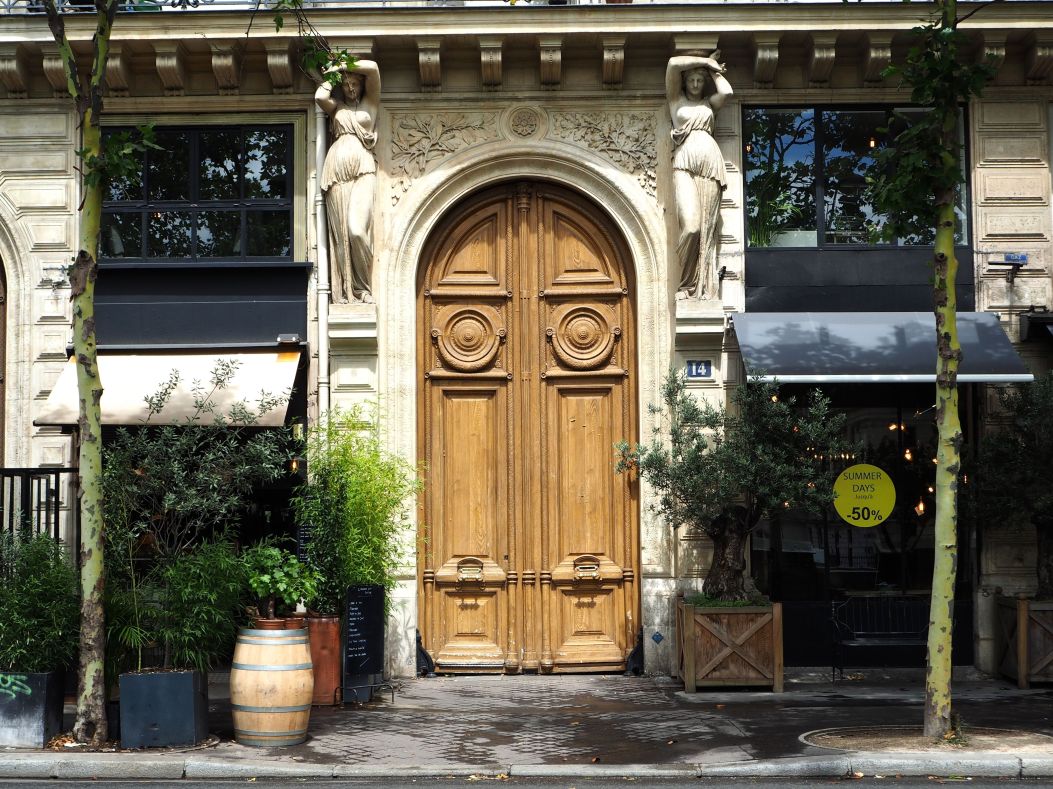 These figures on Quai de la Mégisserie (dating from 1860) fulfill the same architectural role and wear similar Greek drapery but sculptor Aimé Millet seems to have modeled his caryatids on real women rather than ancient statues.  (The photo was taken in June) 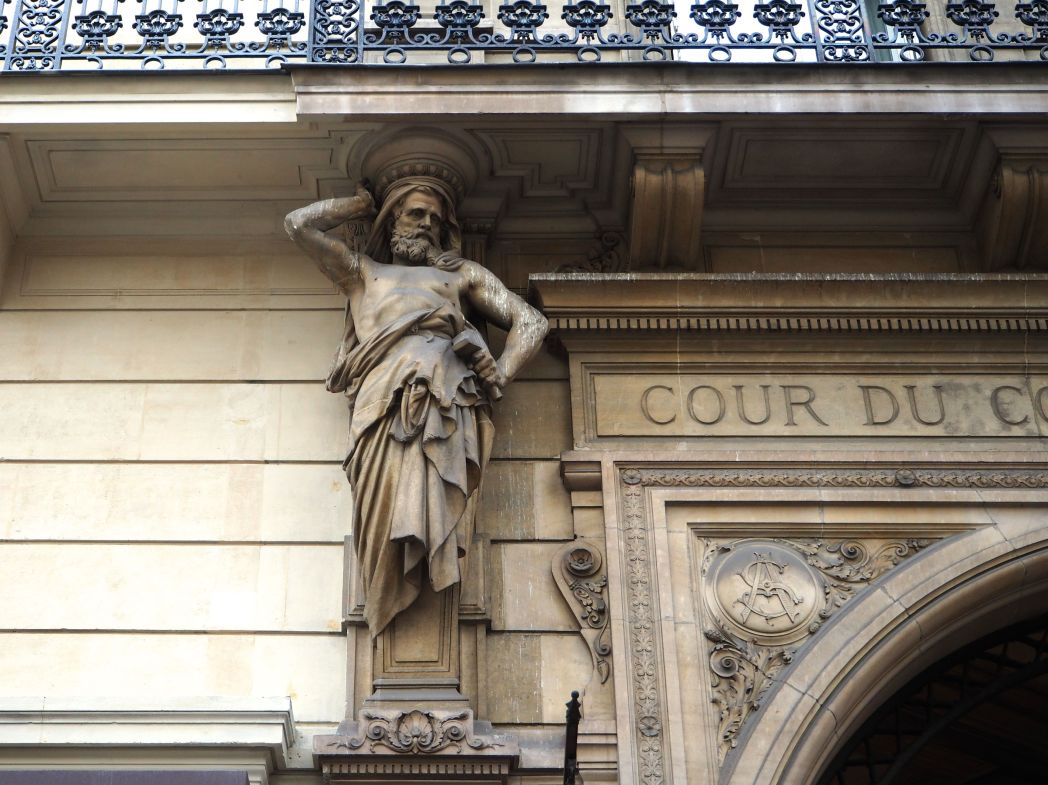 The caryatids’ male counterparts, atlantes were less common in ancient classical buildings but were popular with nineteenth century architects and sculptors  The two figures on either side of the entrance to Cour Saint André (dating from 1877) each have one arm taking the weight off his head while the other holds a symbolic object or two.  Apparently the bearded old man holding a blacksmith’s hammer is Hépthaïstos or Vulcan, the god of metallurgy…

while his younger companion with an armful of complicated symbolism is Mercury or Hermes, the messenger of the gods. (Click on any photo for a closer view) 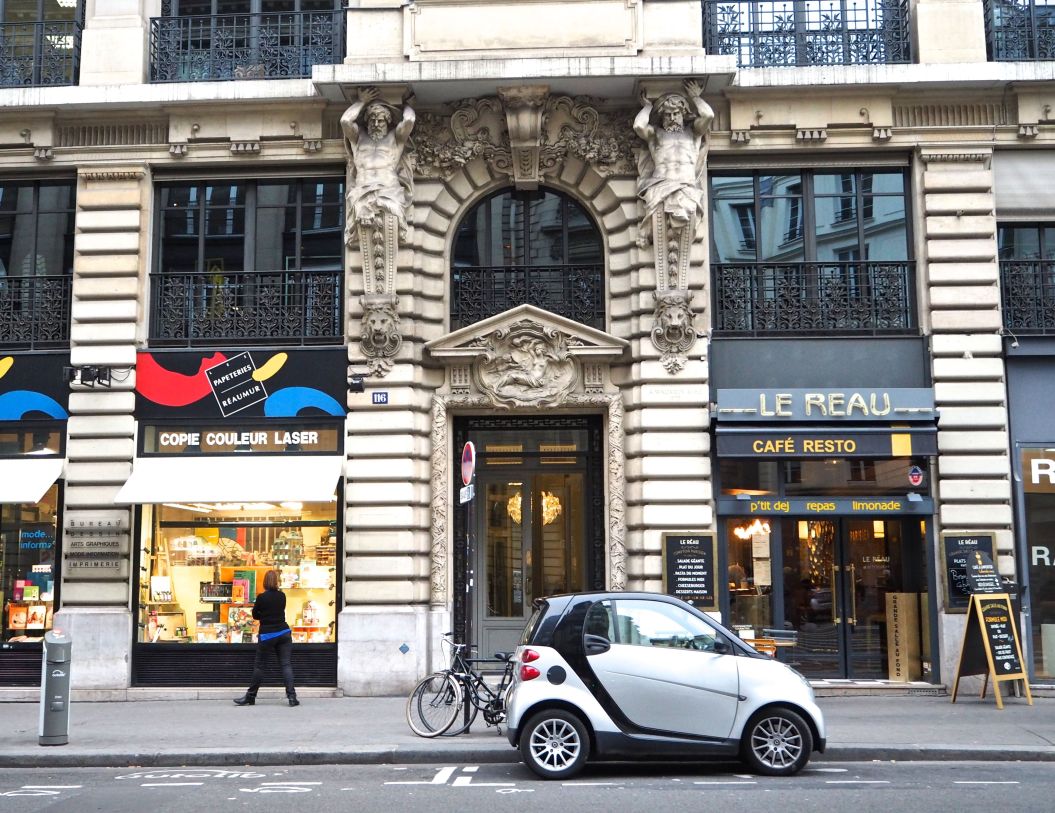 The two figures holding up this porch on Rue Réamur are putting their arms to good use, in the style of Atlas holding up the Earth… 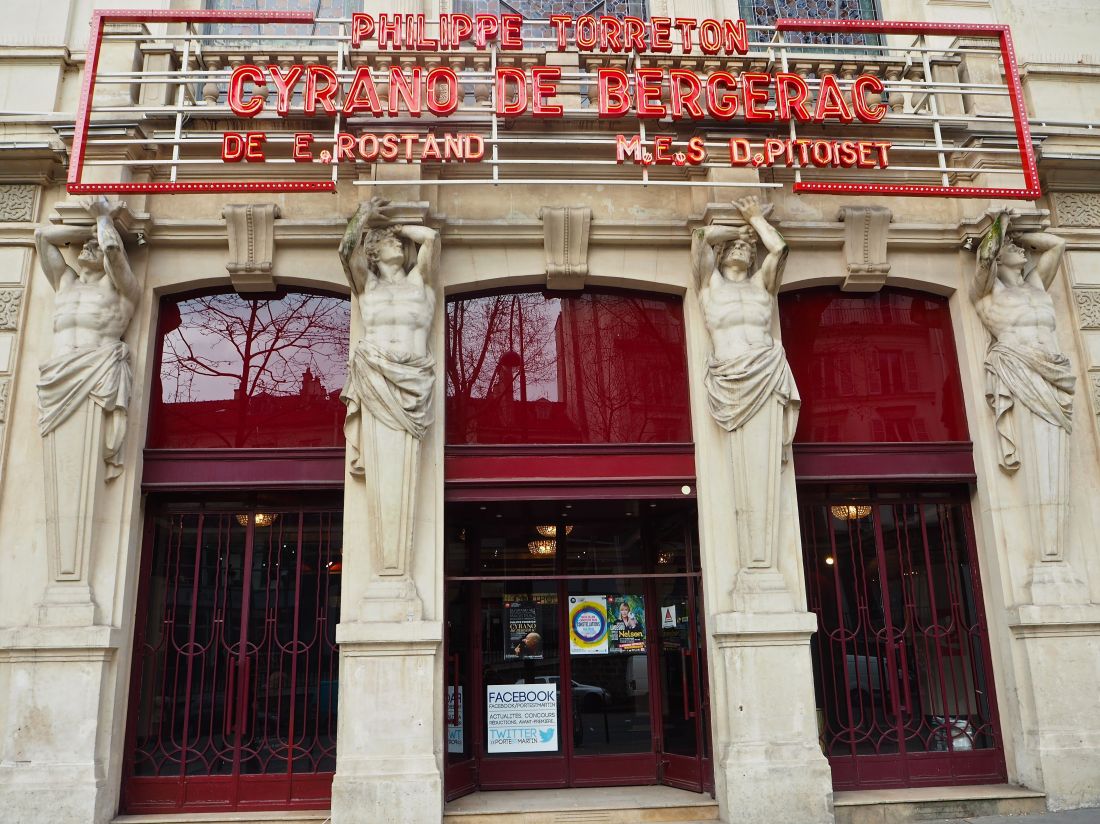 while the atlantes of the Théatre de la Porte Saint Martin are a study in the muscles of arms and torso. However realistic the sculpture, by a strange stylistic convention these Atlas figures all morph into a stone pedestal below the waist.

Now I’ve started noticing caryatids and atlantes they seem to be everywhere in the boulevards of Paris – a touch of ancient classical dignity in the nineteenth century building boom and a boost for the trade of Parisian sculptors.