A photo can hint at the unknown stories of strangers in a city scene or recount a story of the photographer’s choosing.  This image of a sparse procession with royalist banners tells a story I was glad to glimpse.  Supporters of the Front National were on their way to the annual May Day speech by Jean-Marie Le Pen and it looked a pretty unimpressive gathering. I can guess why the man in the raincoat and beret is looking so glum but his story isn’t mine to tell.

Six days later supporters of En Marche were gathering at Le Louvre to celebrate Emmanuel Macron’s election as president.  The place was packed, the crowd was jubilant and the photo tells that story.

By September some of the new president’s plans were bringing protestors onto the streets. This demonstration attracted representatives from many professions, including circus performers.  When the march was halted by an obstruction up ahead people waited patiently, chatting and exchanging campaign leaflets.  Photos in the press the next morning showed the usual handful of black clad anarchists clashing with riot police in a fog of tear gas.  Good humoured clowns didn’t feature in that story. 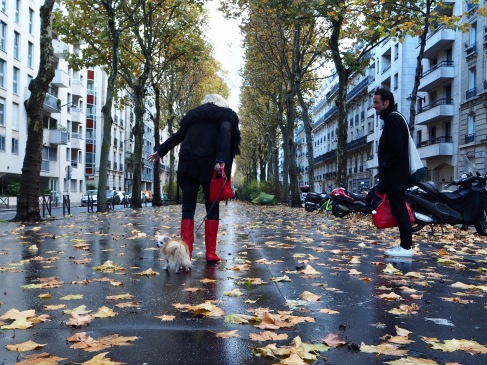 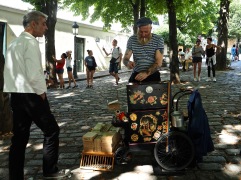 The street organ man catches up with a friend in Montmartre.

A shop of china dolls and an unlikely window gazer.

A helping hand on Belle île.

Watching over a nesting swan in Ventimiglia.

This week’s Photo Challenge sent me scanning through my photos from the past year to pick out those that told a story.  I found more than I expected to. This selection all hint at narratives known only to the people in the picture, none of them newsworthy.  What stories do they tell?  Your guess is as good as mine.