Back in Paris I’m still keeping an eye on the weather forecast for Berwick upon Tweed.

The poppies, daisies and bright pink Lychnis which currently dominate the borders of my Spittal garden will all be thriving in the sunshine.  (The pink poppies and Lychnis came with the garden so they’re right at home here)  Some of the newly planted perennials, like the blue cranesbill on the right, would benefit from a little rain but the soil is deep and rich in this part of the garden so they’ve good reserves of soil moisture to draw on. 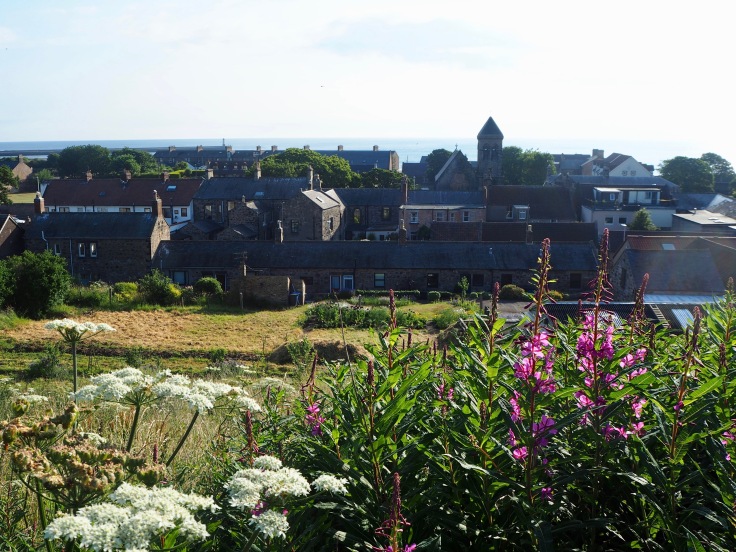 Pink and white are the dominant colours among the wildflowers up on the hill too.  Down near the house the hogweed (Heracleum sphondylium) and rosebay willowherb or fireweed (Chamaenerion angustifolium) would be weeds indeed.  Up here the bold, contrasting forms of these vigorous plants are welcome features of the landscape.

In summer the flat umbels of the hogweed are a rich source of nectar for bees, beetles, hoverflies and other pollinators. In autumn they will be busy with sparrows and goldfinches feeding on the plentiful seed.  Spear Thistles (Cirsium vulgare) have their place on the hill too – another great plant for both pollinators and seed feeders.

There’s also plenty of nectar down in the garden borders.  Both pink and ‘black’ poppies are popular with bumblebees while the annual dill, threaded among the brighter flowers, attracts hoverflies. Like the poppies, dill has deep tap roots so it’s been thriving  despite the lack of rain.

It wouldn’t have occurred to me to plan a border of lavender in a Northumberland garden if I’d not seen how well this established plant was growing, despite last winter’s wind and snow. The narrow border above the yard walls is dry and stony which seems to suit the lavender well. The young plants and seedlings I added earlier in the year are all putting on good growth. The perennial cornflower in the foreground is another plant which came with the garden. It’s spreading slowly with encouragement.

The annual cornflowers from last year’s Pictorial Meadows seed mix are now an established part of the garden’s seed bank, popping up wherever it suits them.  They are a beautiful colour but just a bit too blue to go well with pinks and purples.  The Echium which is the other great survivor from the Aqua mix is a much softer lavender blue, blending gently with brighter colours.  I’ve chosen many of the plants for this garden but others seem to be selecting themselves.

5 thoughts on “Dill and Daisies”