The street art portraits of C215’s Illustres! series are proving very educational.  The men and women portrayed are all honoured among the great and good in the Pantheon but to me most of the names are only familiar from street signs and metro stations.  The characterful portraits have nudged me to learn more.

and in later years.  Bergson was awarded the Nobel Prize for Literature in 1927 ‘in recognition of his rich and vitalizing ideas and the brilliant skill with which they have been presented’. Philosophers have been divided ever since over whether Bergson’s presentation of his theories of time, perception and memory was truly brilliant or rather wordy obfuscation. Bertrand Russell in his History of Western Philosophy concludes that Bergson’s popularity rested more on the poetic way in which he expressed his ideas rather than on rational argument.

Pierre Brossolette (1903-1944) was a journalist, broadcaster and political activist, honoured as one of the first leaders and heroes of the wartime Resistance.  A radical socialist and keen supporter of the League of Nations, by 1930 Brossolette was writing about the growing dangers of nazism. From 1942 he served as commander of the BCRA (Bureau Central de Reseignements et d’Action) the secret service of France Libre, spoke on behalf of the Free French on BBC broadcasts from London and undertook numerous clandestine missions in the occupied zone of France.  Arrested in March 1944 Pierre Brossolette was taken to the Gestapo headquarters in Paris where he was tortured for three days but refused to answer any questions.  Left briefly unguarded though handcuffed he managed to throw himself from a sixth floor window and died that night in hospital.

In the post war years Brossolette, thanks partly to his BBC broadcasts, was considered the main leader of the Resistance.  When De Gaule came to write his memoirs he emphasised the role of Jean Moulin in unifying the Resistance, leading to Moulin’s ashes being transferred to the Pantheon in 1964.  It was not until 2015 that Pierre Brossolette was finally honoured in the same way.  His portrait can now be found on a post box outside the Mairie of the 5th arrondissement, just opposite the Pantheon. 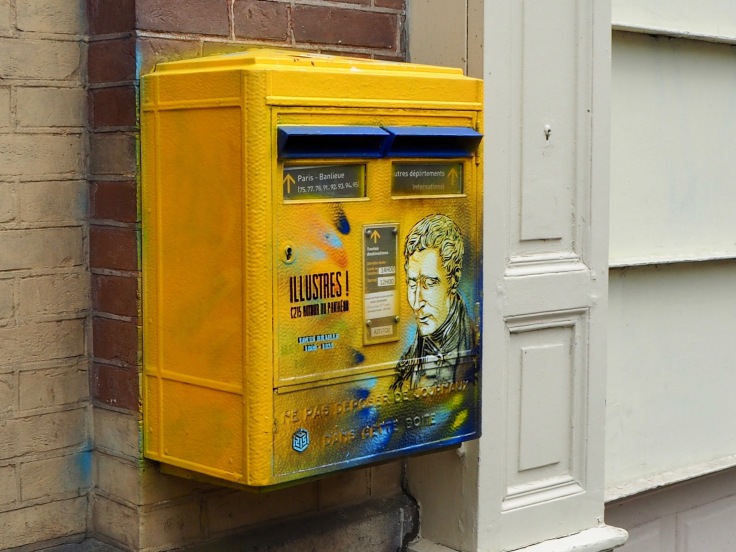 The first portrait in this post is that of Louis Braille (1809-1852), a name known worldwide thanks to his invention of a system of reading and writing for the blind and partially sighted.  Braille himself was blinded as the result of an accident at the age of five.  His parents made every effort to give their son a normal childhood, teaching him to navigate round his home village with canes made for him by his father.

Louis Braille attended the village school until the age of ten when local teachers, impressed by his lively intelligence, helped him to apply for a scholarship to the Institute Royale des Jeunes Aveugles in Paris, one of the first specialist schools for blind children in the world.  Here reading was taught using cumbersome books with large raised letters, hand-crafted by a method devised by the school’s sighted principle.  This system gave blind people access to written texts but didn’t enable them to write.  Louis Braille was determined to develop a simple system that could be used for both reading and writing and devoted much of his life to inventing and refining the Braille system, based on patterns of raised dots, which is used worldwide today.