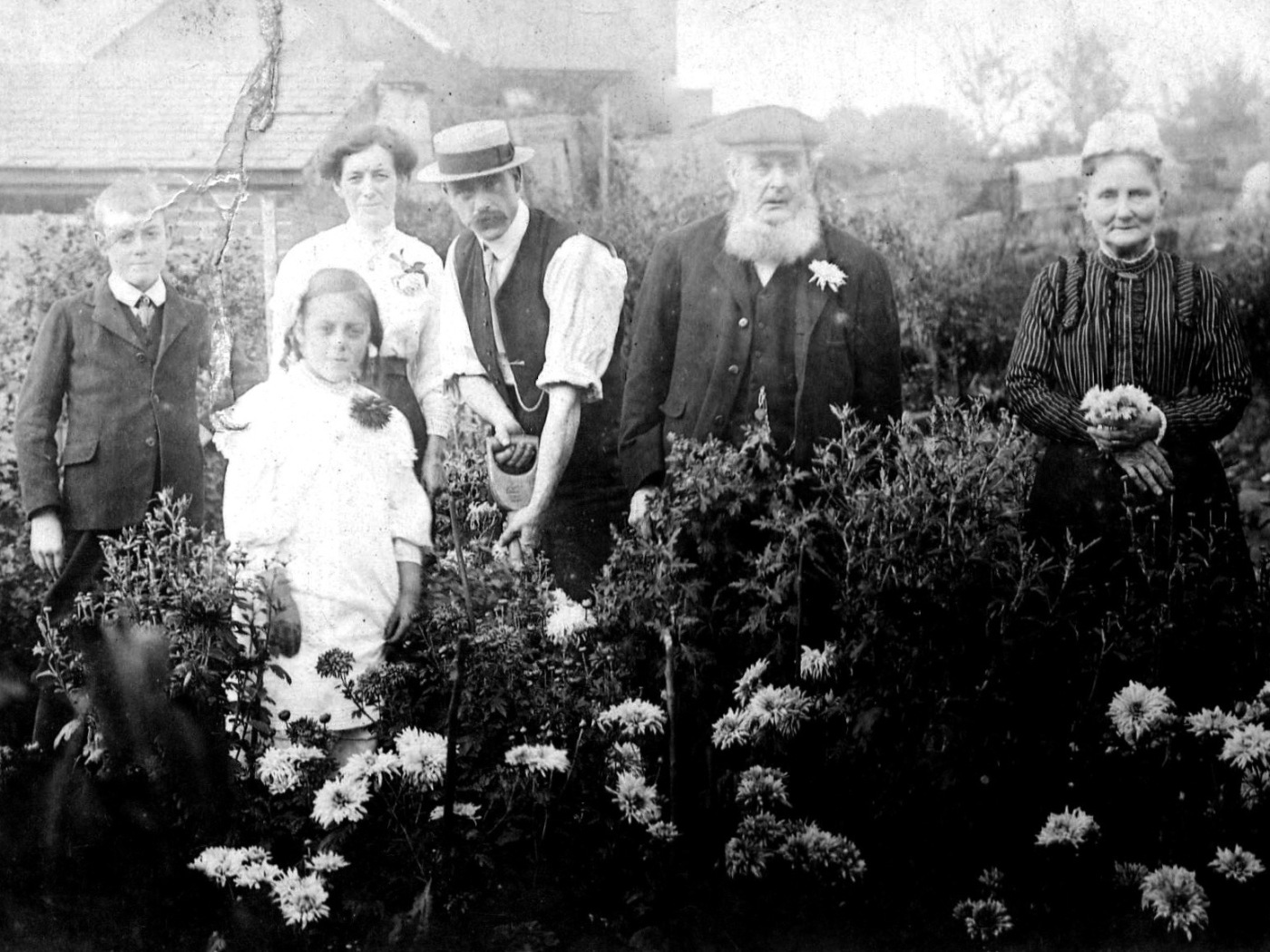 On a warm September day in the early years of the twentieth century the first chrysanthemums are already in flower. Uncle Joe, sleeves rolled up and waistcoat unbuttoned, seems to be posing in action with his spade or fork but the rest of the people in the picture, decorated with chrysanthemum button holes, are standing seriously upright.  What’s the special occasion? We’ll never know.

It took some family detective work to put names to all the faces in the photo.  Before the mists of time started to cloud her memory my mum, Audrey, recognized the old lady in the white lace cap as her great grandmother, Mary Ann Rance and the gardener in the straw hat as her great uncle Joseph Butcher.  Birth dates and other photos helped identify Joe’s three younger siblings, Alice, George and Annie.  Guesswork suggests that the old gentleman with the bushy white beard is the great grandfather Audrey never knew, Levi Rance. 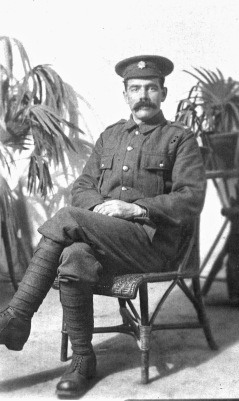 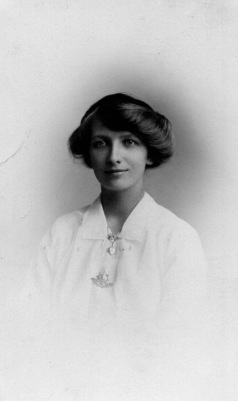 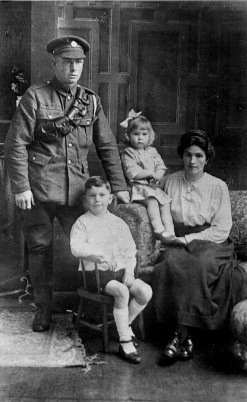 Joseph Butcher was a forester in the Chiltern beech woods whose woodworking skills were diverted to building Nissen huts and shoring up trenches in the WW1 battlefields.  Audrey remembered her great uncle in later life as a quiet and gentle man who nurtured and replanted tree seedlings collected from the woods around his cottage.  Alice, aged around 20 in the group photo, had worked as a domestic servant since the age of 16.  By 1914 she was married with three children.  She had another four children over the next ten years and died in 1930 at the age of 45. The bare facts suggest her life was hard but my great-aunt remembered the joy of Sunday afternoon visits by pony and trap to Alice’s home.

The Rance and Butcher families were connected through Walter, Levi and Mary-Ann’s son, and his wife Carrie Butcher.  The 1891 census tells us that at aged 16 Walter was a factory labourer in Berkhamsted.  Ten years later he was a fishmonger working on his own account, married with two small children.  Neither official records nor family stories tell us how he made the transition between the two but the business thrived and by 1911 Walter’s new fishmonger’s shop in Amersham had a telephone installed, Amersham 32. 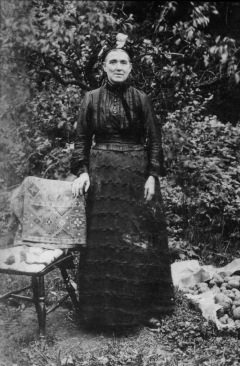 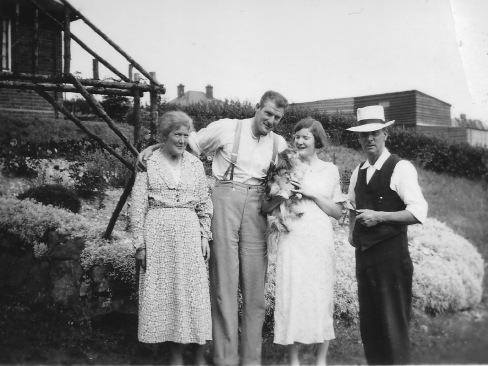 Carrie and Walter Rance with Sydney and Brenda about 1935

Carrie, sister of Lizzie, Alice, Joseph, Annie and George, was the eldest child of Mary-Ann or Polly Butcher.  While photos of Carrie (my great-grandma) show someone familiar from my own childhood, the one surviving portrait of Polly offers a glimpse into an unfamiliar past. The picture shows Polly in a formal pose resting her hand on the back of a chair, almost like a studio portrait in front of a painted backdrop, but this background is a real workaday garden. The kitchen chair is draped with a folded kilim rug, maybe a prized possession. I guess the potatoes displayed on a sack in the corner of the photo were a matter of pride too; a good crop of her own growing. The photo was probably taken around 1910 though Polly’s worn Sunday best clothes look as if they date from the end of the previous century.

Family stories describe Polly as fiercely independent; she once carried a new kitchen table home the two miles from Tring to Wigginton on her back rather than wait for the shop to deliver it.  As the single mother of six children she needed to be resourceful, supporting her family on a small income from straw plaiting and the produce of her garden and allotment. My mum remembered childhood visits to great grandma Polly’s ‘real cottage garden’ and her warm welcome with a ready supply of bacon sandwiches from the family pig. A story book grandma from another age but in some ways a thoroughly modern, self-sufficient woman.

Most of these photos come from a small suitcase of family treasures hoarded by Annie Butcher, my great-great aunt.  Annie, the young girl in the first photo, was ‘in service’ all her working life, latterly as housekeeper for a couple who lived in a grand London apartment, just next to Regent’s Park. By the time I remember her Annie and her companion Lizzie Heard had retired to a small wooden bungalow on the outskirts of Chesham. Annie had clearly had enough of housekeeping by this time and devoted her energies to her appealingly wild garden. I remember fruit trees and current bushes, rambling roses and rough grass sloping away to the countryside beyond, an image lodged in the back of my mind, still inspiring my own gardening.

The last photo looks familiar in its informality though it was taken about 1924.  Audrey, the small child in that picture is now in her 98th year.  All her life she has carried with her a love of the Chiltern beech woods around her childhood home (the woods where her uncle Joe worked) and a fondness for the simple cottage garden flowers that grew in her great-grandma’s garden. Audrey sleeps a lot now and speaks little, though she often wakes smiling. I wonder where she goes in her dreams.