With only five weeks to go before we move away from Paris I’m reviewing my list of city sights I’ve not yet seen.  Passing by the Palais de Justice on a bright autumn morning I noticed that there was no queue at the entrance for visits to Sainte-Chapelle.  This ‘jewel of gothic art’ is hidden away in the centre of a dull complex of nineteenth century court buildings.  Past the bag check and round the corner of a three storey stack of temporary office cabins, the queue for the ticket office came into view, stretching along two sides of a shady courtyard.  It was a cold day for queuing but I had some time to spare and the sun was low in the sky, surely ideal for viewing the famous medieval stained glass.

The lower chapel of Sainte-Chapelle with a statue of Louis IX, later recognised by the Catholic church as a saint 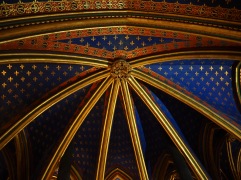 Gold ribs lead your eye upwards to the starry ceilings 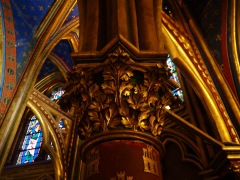 Every surface is decorated

The Sainte-Chapelle is famous for its soaring pillars and massive windows so the dark, richly coloured lower chapel came as a surprise.  Nineteenth century restorers studied patches of paint and gilding that retained their original brightness to choose closely matching shades and materials, so the chapel is much as it will have looked when startlingly new.  Every surface is decorated. Golden ribs lead your eye up russet red columns to a midnight blue ceiling patterned with gold fleurs-de-lys; sumptuous and extravagant but remarkably harmonious.

On a cloudy day the upper chapel is also quite dark…

but the tall windows glow with colour

Each separate roundel or diamond illustrates a different bible story 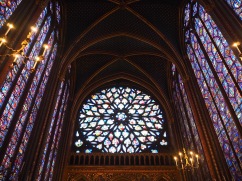 The rose window was added in the fifteenth century 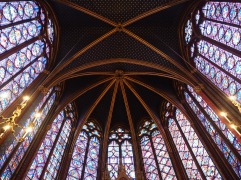 From outside the buttresses between the windows look much more solid

By the time I reached the upper chapel the sky had clouded over, so you’ll have to imagine the effect of sunlight streaming through these magnificent windows.  As in the lower chapel the pillars are patterned in red and gold with golden ribs leading up to the vaulted ceilings but, even on a cloudy day, it’s the windows that hold the eye and make this space unforgettable.  Two thirds of the stained glass dates from the 13th to 15th centuries, as brilliantly coloured now as when it was first installed.

The Sainte-Chapelle was built at the command of king Louis IX between 1238 and 1248 to house his collection of holy relics.  Foremost among these was a circlet of rushes bound with a thorny twig believed to be part of Christ’s crown of thorns.  Whatever the origins of this relic, a crown of thorns had been venerated in Jerusalem since the 6th century AD and thorns taken from it were passed between kings and bishops as valuable diplomatic gifts.  Louis bought the remnants of the crown and other relics of the crucifixion from Baldwin II of Constantinople, whose impoverished realm was supported by loans from various European monarchs.   After installing the relics at Sainte-Chapelle, Louis extended his own influence by presenting thorns from the crown to dukes and barons he wished to favour, leading to the building of many similar chapels in France and beyond.

The light and bright interior of the Vincennes chapel

A view of the Sainte-Chapelle of Vincennes (founded by Charles V in 1379 but not completed until 1551) gives an idea of how the original chapel looked before it was crowded round with tall buildings.  The lower chapel was omitted from the later copy but the high pitched roof, corner pinnacles and ribbed buttressing between the windows openings are very similar.  The interior of of the Vincennes chapel is light and bright, largely because stained glass windows smashed at the Revolution were replaced with lightly patterned glass but also because changing fashions moved away from heavy, richly coloured decoration.