Looking north along Spittal beach one landmark immediately catches your eye.  The white tower with its red base and roof stands out clearly on the skyline whatever the weather.

A calm, low tide image in warm evening light – the light may be warm toned but this picture was taken in December 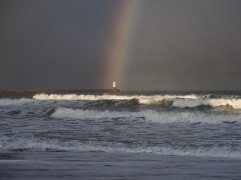 A rainbow touches the lighthouse – mid afternoon in October 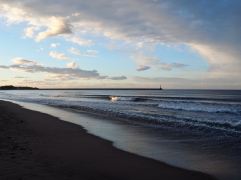 Low tide calm – ten to nine on an August evening

Leaving harbour at last light – half past five in October

Since 1826 the lighthouse at the end of Berwick Pier has marked the safe channel for ships entering the mouth of the river Tweed.   The main, flashing light shines out to sea through a wide window on the front of the tower.  From the land, only the fixed, green light which shines through a small window on the back of the tower can be seen.

For May Jude’s Photo Challenge is All about light.  This week she asks us to study light through the day from one location or on one object, returning to see how the light changes and affects the view.  This post is inspired by that assignment though I haven’t quite followed the rules.

The headline photo was taken on a still, sunny evening two weeks ago.  This afternoon I took my camera back down to the beach to look at the same view under gathering clouds – that’s the final image.  Two minutes later a fierce wind swept across the river mouth, hurling sleet in its path. The changing light is closely tied up with rapidly changing weather round here.

The six images in the gallery explore the same view in different light, at different tides through the changing seasons.  Click on any image to view the gallery with background information.

8 thoughts on “Light and Weather”