Set into a small, brick pillar at a quiet road junction on the Isle of Eigg, this postbox can never have handled a great volume of mail.  It’s out of use now but local residents don’t have far to go to the next post box. 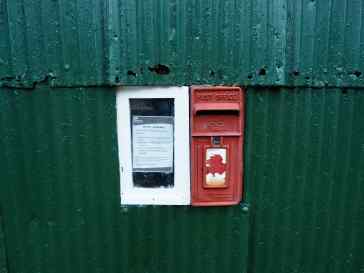 Half a mile down the road, it looks as though the post box on the old shop is still in use.  It was a Friday when I took the photo so I may just have missed the post.  I guess the ‘one hour’ on the collection information may have referred to one hour before the departure time of the ferry.

Post box enthusiasts may notice that, while the older box has George V’s GR cypher, this box carries only a Scottish crown. When Elizabeth II acceded to the throne and adopted the EIIR cypher, Scots nationalists objected that Scotland had never previously had a queen Elizabeth so the new monarch was the first of that name.  After protesters blew up the first EIIR box to be installed in Edinburgh in 1953,  it was quietly decided that in future only the Scots crown cypher would be used on post boxes during the queen’s reign.

9 thoughts on “Out of Service”